Why Can’t I Feel My Abs When Doing Ab Exercises?

Can’t feel your abs when doing ab exercises? You’re not alone, and there are a number of potential reasons why you’re facing this problem…

One of the most common mistakes made when performing exercises like the standard sit-up or crunch, is recruiting the hip flexors instead of the abdominal muscles.

Fix it: When performing this type of exercise, think about rolling up instead of folding, and imagine you’re trying to make your lower rib cage touch your pelvis.

Doing some hip flexor stretches prior to your ab workout will help to relax the hips and recruit more work from the abdominals.

Most of us spend way too much time sat down on the average day. Even if you hit the gym regularly, this sedentary lifestyle can result in lazy abs, glutes and other core muscles. 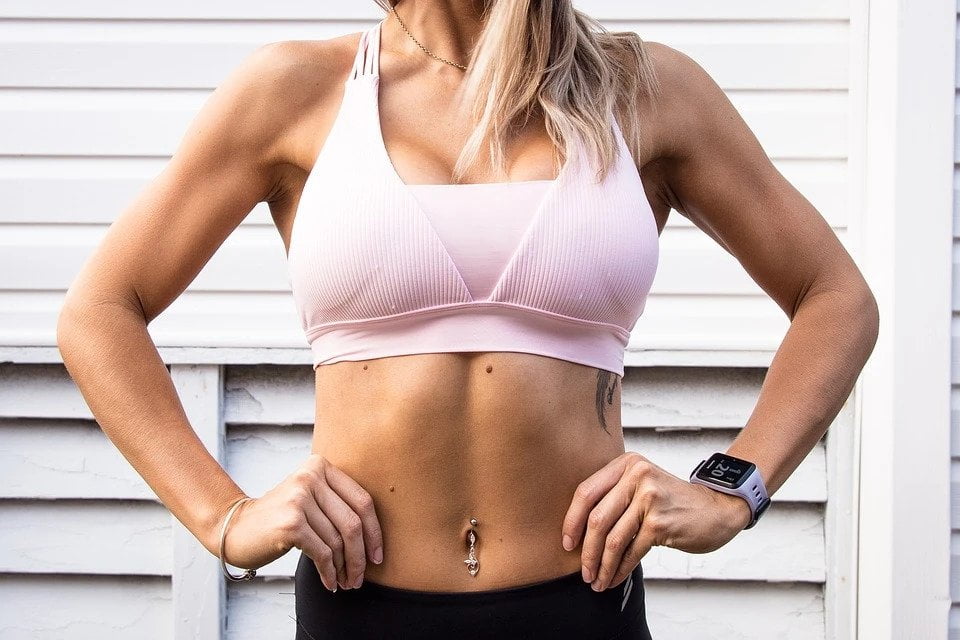 When the abs become disengaged, other muscles (such as the lower back and hip flexors) will take on the work, eventually becoming tight and overworked. As the abs get weaker and the back and hip flexors tighter, you will end up with an anterior pelvic tilt, meaning your hips tip forward and your butt sticks out.

Not only is this going to cause problems such as knee pain and back pain, it’s also going to make it harder for you to engage your abdominals when working out.

Fix it: The first thing you need to do is get in the habit of engaging the abs and glutes when doing other exercises, such as squats, deadlifts, overhead presses and so on. This will get your lazy muscles back in the habit of helping out when they’re needed.

Stomach vacuums are also going to be a massive help, as they will strengthen the deep abdominal wall, which is otherwise reasonably hard to target. Watch the video below to learn how to do stomach vacuums. 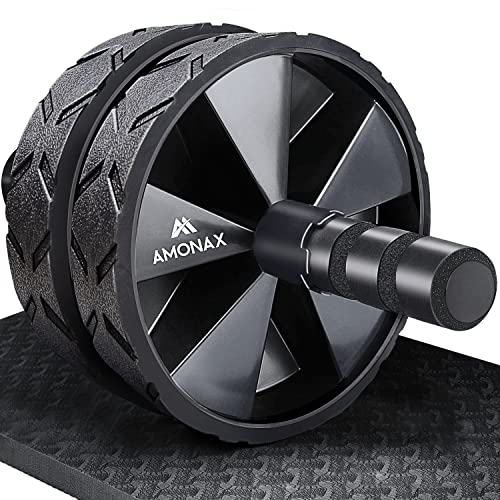 Super cheap and very useful Ab roller exerciser. It is a must as a part of your own gym equipment.

3. You’re working out on a full stomach.

We’re often told that we should eat within an hour previous to our workouts if we want to maximise our performance. There’s truth to this theory, but you may want to be more careful about what, and how much, you eat. 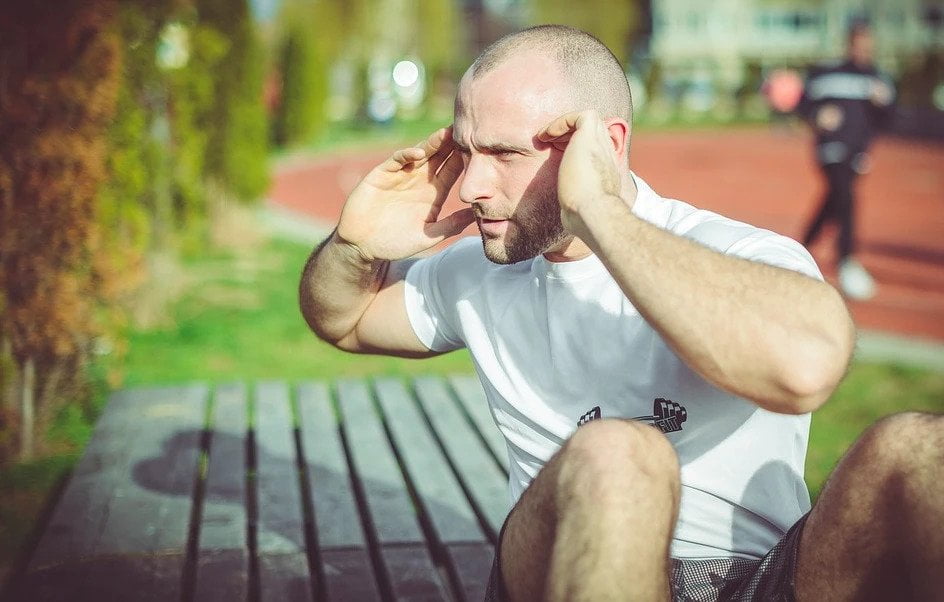 If our stomach is too full, we leave little room for ab movement. It’s also important to note that many of us have food intolerances that we’re not aware of. These intolerances can actually result in our stomach muscles feeling almost numb.

Fix it: Next time you plan on training abs, try eating a smaller meal beforehand, and perhaps consider cutting out things that could possibly be causing some kind of inflammation, such as bread, pasta or rice. You may also want to avoid man-made foods such as protein shakes/bars.

For some reason, we train our abdominals in a different way than we do our other muscle groups. By that, I mean we don’t tend to use weight, and we stick to really high rep ranges. 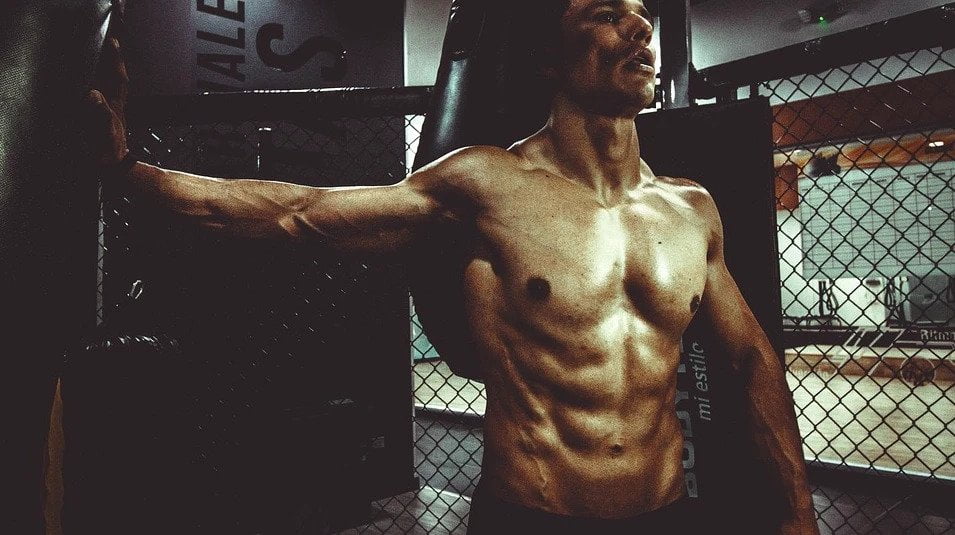 Our ab workouts also tend to stay the same, and we don’t focus on progressive overload like we would do when trying to increase the weight we can squat or bench press.

Fix it: Consider adding weight to your ab exercises and focus on a rep range below 10, especially if you’re going for that thick, bulky ab look.

5. You’re dropping too fast on the eccentric.

This mistake is made on a lot of exercises, but is especially common with things like sit-ups and crunches. We work really hard on the way up, then relax and drop on the way down. 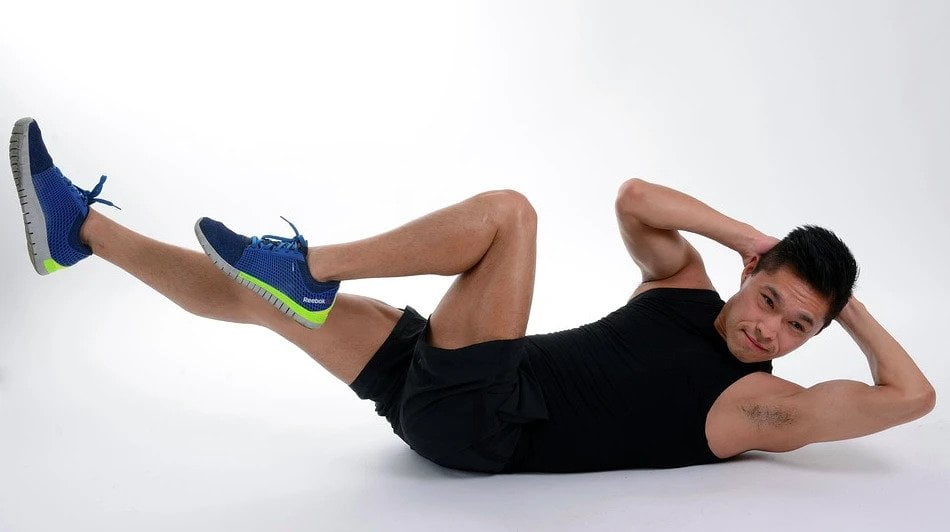 By doing this, you’re missing out half of the exercise and consistently cutting the time under tension, which is a really important factor when training for muscle growth.

Fix it: Make sure you’re lowering yourself at a controlled speed on the way down. By maintaining engagement in your abdominals throughout the eccentric as well as the concentric part of the movement, you’re massively increasing time-under-tension, causing a lot more strain on the muscle fibres and resulting in better growth.

6. Your range of motion is too short. 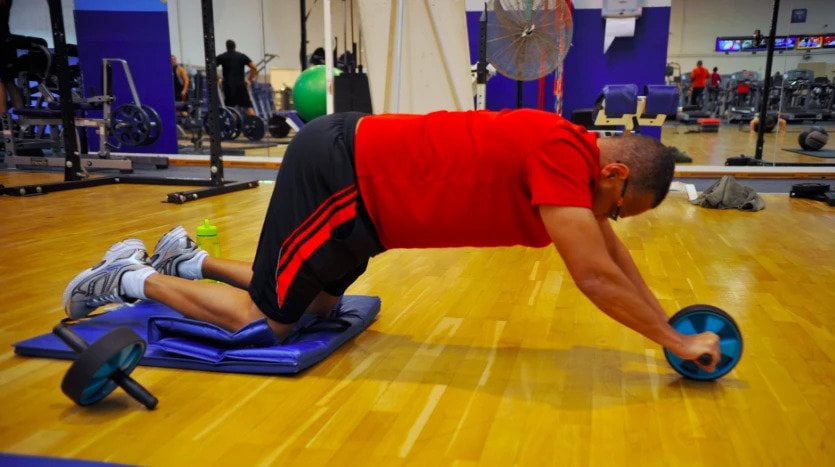 Fix it: Like time-under-tension, range of motion plays a huge role in working and breaking down a muscle. If you’re going to do crunches, consider doing them on a Swiss ball, which will allow you to stretch your abs more than you’d be able to when on the floor. And consider other exercises that allow for a bigger range of motion, such as hanging leg raises.

One of the functions of your abs is to assist in exhalation. If you want to maximise ab contraction whilst doing ab exercises, you should try to full exhale through the concentric part of the movement (on the way up in a crunch, for example).

Super cheap and very useful Ab roller exerciser. It is a must as a part of your own gym equipment.

Why Does My Back Hurt When I Do Abs?

One of the most common complaints from people who work out in the gym is why their back starts to hurt when they are training their abdominals. Mostly, people experience backache while doing leg raises and the plank.

Experiencing back pain while working your abs isn’t ideal. Still, it doesn’t mean you should give up doing the plank as this is a very valuable exercise as it specifically works the anti-extension properties of the abdominals. Something that is missing from most abdominal exercises.

Leg raises also challenge the lower abs, which are not fully targeted by other abdominal exercises. The lower abs are the weakest area of the abdomen because they are not commonly engaged during your typical range of movement in your normal day. It can help to add some strength training in the form of leg raises to add balance to an area of your abdominals that are vastly underused.

How the abdominals protect the spine

The abdominals help to prevent spinal extension. Having strong abs will pull the pelvis into proper alignment, which helps avoid any anterior pelvic tilt that puts pressure on the spine. You can often spot people with an anterior pelvic tilt as their bottom will stick outwards and upwards, similar to that of a duck’s tail.

For these people, performing the plank or leg raises will cause pain in their back because they will feel tremendous tension on their lumbar spine. They will perform leg raises and plank exercises without tilting their pelvis forward, resulting in an over-arc in the lumbar spine and a hunched thoracic spine, causing back pain.

It is common to feel some tension in your lower back while exercising your abs. However, if you do these exercises with correct spinal alignment and proper technique and still feel pain, then it may be that you are progressing through your exercise programme and pushing your abdominal training too quickly.

While it may hurt your pride to admit you need to take your training down a step, resolving back pain while working on your abs can often be this simple. Holding the plank for a shorter time and doing fewer leg raises will still work your abs, but it will not fatigue your spine or cause you back pain.

When performing leg raises, it can help to adjust your technique to take pressure off your lower back. This can be as simple as adding a slight bend to the knees or even returning to bent-knee leg raises until the issue resolves.

It is essential to strike the right balance of exercises in the gym. You often see people neglecting the most important exercises that help improve your overall strength and will only work out to target what they see as their problem area – often their abdominals.

If your training programme is heavy on crunches, leg lifts and planks, make sure you include primal movement exercises that target your larger muscle groups and natural range of motion. Include deadlifts, hip thrusts and loaded carries to engage a whole range of supporting muscles. This ensures correct muscular balance and spinal alignment. If your spinal alignment is off, you can expect to feel back pain when training your abs.