Should you really avoid carbs when trying to lose weight?

Eating carbs will lead to weight gain. Well at least that’s what we’ve come to believe. But what’s the truth? Should you avoid carbs when trying to lose weight, or is this just one more fitness myth that needs debunking?

According to Aisla Pigott, a registered dietitian and spokesperson at the British Dietetic Association, the last thing we want to be doing when trying to maintain a healthy body and lifestyle, is avoiding carbs. She in fact says that it’s a simple matter of calories in vs calories out, and that all food will lead to weight gain if consumed in a larger quantity than the body needs.

If you take a look at the majority of carbohydrate sources, they’re almost all really healthy food choices. Fruits, vegetables, greens and grains. Carbs are often rich in nutrition and don’t just provide a variety of vitamins and minerals for the body, but also fuel the brain. Our brain cannot function without glucose, which is the breakdown of carbohydrate.

And we’re not just missing out on some great benefits when we avoid carbs, we’re also forcing our body to create glucose from protein and fat in a process that leaves us feeling sick and tired, and even with smelly breath. On top of this, starchy carbs like bread, rice, pasta and potatoes play a huge role in appetite regulation. So, binge-eating can quite often be tracked back to a lack of carbohydrates in the diet.

So where’s this anti-carb myth come from? Well, carbohydrate portion sizes are now two times bigger than our grandparents’ generation, and on top of this, our activity levels are much lower. The discovery that our body converts carbohydrates into glucose for energy could also play a role in the projection of this anti-carb myth. If we eat carbs, we consume energy, and when we consume energy, we don’t burn fat. It seems logical – and it is. But, it really is as simple as calories in vs calories out.

Both complex and simple carbohydrates provide 4 calories per gram. But there is a big difference… fibre. Complex carbohydrates such as oats, brown rice, quinoa, potatoes, beans, peas and lentils, all contain high amounts of fibre, which actually slows down digestion, making you feel fuller for longer. 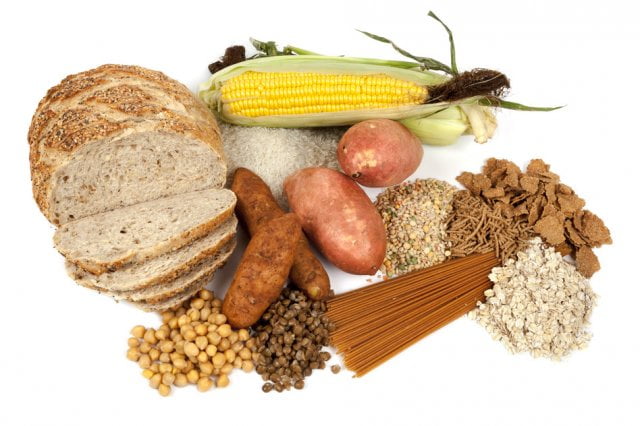 But, simple carbohydrates such as white rice, pasta, cakes, fruit juices and other sweet stuff will be broken down more quickly and lead to a spike in blood sugar levels, causing more hunger cravings soon after eating. So, while the two technically contain the same amount of energy, it’s simple carbohydrates that are more likely to lead you down a path of increased hunger and over-eating.

Both the high carb diet and the ketogenic diet were equal in calories and protein, and they had no access to any outside foods for the entire 8 week period. Participants also rode an exercise bike for 30 minutes daily. Changes in energy expenditure, body composition and relevant blood markers were recorded each day using the gold-standard methods where possible.

So there was no difference between eating patterns on fat loss despite the difference in insulin, effectively disproving the carbohydrate-insulin hypothesis, which states that carbohydrate drives obesity because it raises the hormone insulin, which is said to block the release of fat and also drive additional fat storage.

Switching to the low carb diet did cause an initial sharp decrease in total weight loss, but this was due to the drop in water weight that accompanies carb restriction.

It’s good news. Carbs don’t make you fat. And they don’t have enough of an impact on your insulin levels for you to worry about gaining weight easier. It’s a simple matter of calories in vs calories out. Consume a healthy balanced diet of proteins, carbohydrates and fats from a variety of sources, and keep an eye on your calories if you’re worried about gaining weight.